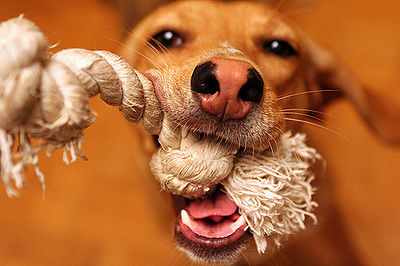 Playing tug-of-war with the correct rules can be a fun game for you and your dog. But before you play, you want to teach your dog the right way.

If your dog has a lot of energy and loves to play, it’s great exercise.

If you have a puppy, it’s a good time to start playing and teaching the game of tug-of-war and is a great bonding and learning experience.

Teach your dog the “drop it” or “release” command. When your dog learns to obey, praise him and continue the exercise, giving the toy back. When your dog realizes he doesn’t lose anything, he’ll be more apt to pay attention to the commands.

Show that you are the leader of the pack by being the one to initiate the game and end it.

When you choose tug-of-war toys I don’t recommend your socks or any clothing items. This only teaches your dog that these are toys and your dog can’t distinguish between rags and your favorite blouse. Choose toys that can’t get lodged in your dog’s throat. Don’t yank so hard that you can injure your dog’s jaw or pull out a tooth. It is not funny or safe to have your dog hanging in air holding one end of the toy.

Once your dog understands the commands,stop the game if your dog does not obey the “drop it” or “release” command or when your dog shows any sign of aggression towards you. If your dog becomes too excited or his teeth touch you, even by accident, stop playing. Allow your dog time to calm down before beginning again or leave it for the next day. If your dog runs away with the toy, don’t run after him. You can offer another toy or ignore him. This way your dog will learn that if he doesn’t follow the rules, it’s game over.

If your dog has aggressive or possessive tendencies or is aggressive with people, don’t play this game for it may encourage these predilections. Spaying or neutering your dog will help curb aggressive inclinations.

Some animal behaviorists feel the tug-of-war game communicates aggression. However I’ve found with proper training and following the rules, my dogs and I have fun playing tug-of-war.

Interesting notes about tug-of-war: It dates back several thousand years in ancient Egypt, Greece and China. Tug-of-war was an Olympic sport during the years 1900-1920.

Ever wonder why your dog does the things he does? Scientists have only recently begun studying dog behavior seriously. Dog owners all know that their dogs are intelligent and can understand them pretty well. Researchers are studying how much of the anecdotal stories can be proven scientifically and whether dogs’ behavior has been modified as […]

Gun dogs were developed to help hunters find and retrieve game, usually birds. The types of gun dogs include pointers and setters, flushing dogs and retrievers. Gun dogs can make great pets; they are loyal and friendly, love to play and are affectionate with their families. They are usually gentle with children. Gun dogs have […]

Thinking of taking your dog with you on a visit to a national park? You should be aware that national parks have very specific regulations regarding pets at these parks. Most state and national parks allow pets but most require that they be restrained and some don’t allow them on the hiking trails or on […]