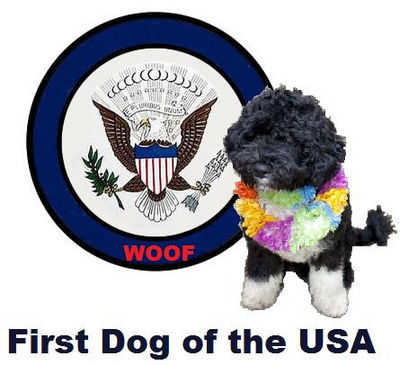 All the U.S. Presidents have had pets except for three. Pres. Barack Obama is no exception to the rule. Shortly after entering the White House, he and his family adopted a six-month old Portuguese Water Dog which they named Bo. The pure-bred dog was given to the Obamas as a gift by Sen. Ted Kennedy and his wife. During his election campaign, the President promised his daughters a dog as a reward for all the time spent on the road.

Some animal rights activists expressed disappointment that the Obamas had not adopted a shelter dog. Others lauded them for taking in a dog who didn’t adjust to his previous home. The Humane Society of the United States called Bo a “second-chance dog.”

Before Christmas 2009, Bo made headlines by barking at Santa on a First Family (minus the President) outing to the Children’s National Medical Center. The First Lady, Michelle Obama, took it in stride, explaining that Bo had never seen Santa before. Also before Christmas, executive pastry chef Bill Yosses fashioned a marzipan model of Bo.

In June 2009, the White House released a “baseball card” for Bo, with his picture on one side and information about him on the other. Some of the fact included are that his favorite food is tomatoes and that he doesn’t know how to swim.

Video: Obama Shows Off Bo’s Handshake Trick (and almost gets tripped by him)

The Importance of Leashing Your Dog

Leashing your dog – a subject close to my heart. When you leash your dog, it’s an important part of teaching that you are the pack leader. And you have control of your dog when leashed. I’ve heard many stories from people who tell me of their off-leash dogs that would never disobey a command. […]

Flat-faced or brachycephalic dogs are not only cute, roly-poly and extra huggable, but they also require special care. In case you didn’t know, brachycephalic dogs are those with short snouts including Pugs, Bulldogs, Pekingese, and more. There are a number of health concerns that you should consider when owning a flat-faced dog breed. Issues with […]