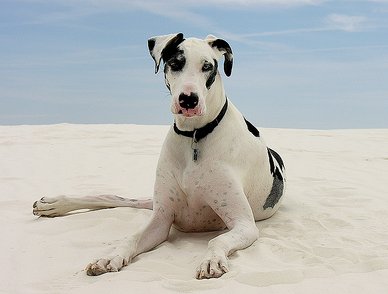 Panosteitis is the inflammation of the long tubular bones of the legs. Inflammation can affect more than one limb, but is more common in the front legs. It is a painful condition and can be identified by lameness and limping.

The cause of Pano is still unknown although there was a theory that the speed of growth can be a culprit. Pain and lameness can be intermittent and can be mild to severe.

Some pets display symptoms such as fever, depression and weight loss. If the muscles are not used, over time they can atrophy (waste away).

As with any ailment, your pet should be examined by a veterinarian to determine the cause of lameness. Tests including blood evaluations and x-rays will help detect if it is Pano or a different medical condition.

Panosteitis is known as a limited disease because it generally resolves itself as the pet grows older. At this time there is no known preventive for Pano.

Brachycephalic Syndrome is a group of upper airway abnormalities often seen in flat-faced dogs such as Pekingese, Pug, Bulldog, Boston Terrier and French Bulldog. It refers to the combination of elongated soft palate, stenotic nares, and everted laryngeal saccules, which are commonly seen in these breeds. It is an inherited disease which causes difficulty in […]