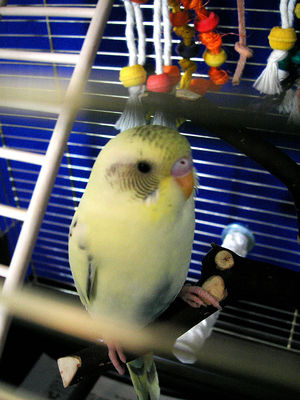 Newspaper is the least expensive, easily available, non-toxic liner for your bird’s cage. But a risk has been discovered using old newspapers and aspergillosis is its name.

Aspergillosis is caused by the organism, Aspergillus fumigatis and is a fungal infection common in birds. Aspergillus spores occur naturally in the environment and humans are exposed to them too.

Aspergillosis is generally a disease of the respiratory tract but can affect all organs. Birds contract it by breathing in the airborne spores. Birds that are immune-compromised, have other diseases, with poor cage hygiene practices, are more prone to the disease.

Symptoms can be lethargy, decreased appetite, weight loss, shortness of breath. Early diagnosis of the disease is difficult and the mortality rate is high. Treatment involves oral anti-fungal medications. In severe cases where granulomas form, surgery may be necessary.

Back to what newspapers have to do with aspergillosis.

A veterinary clinic in Australia was having a problem with a high number of birds coming down with the disease even though the cages and surrounding areas were kept spotlessly clean. Upon investigation it was found that the clinic was using newspapers it had neatly stored for many months. While aspergillus spores occur naturally in newspapers, after they are 2 weeks old, it was discovered that the spores increase significantly. The connection was then made between the increase in infections and the use of old newspapers.

Suggestion – to be on the safe side, use fresh newspapers not more than 2 weeks old to line your bird’s cage.

What to Look For in a Bird that’s Ill

Birds hide their illnesses so well it’s often in the late stages that we discover they are sick. But there are signs that can help you find out if they are ill. Check your bird’s droppings daily. Color and consistency changes can mean problems. Yellow, rust or black droppings can be caused by internal bleeding. […]