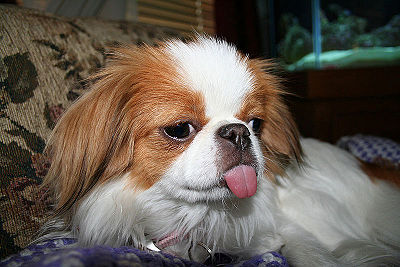 The Japanese Chin dog stands about 8-11 inches in height and averages 7-9 pounds in weight. Their coat is medium in length, straight and silky. They carry a ruff at the chest, legs and rear. The tail is carried up over their back with long profuse feathering on it.. The Japanese Chin dog coat comes in many colors from black and white to red and white and even tri-color. The body is square and compact. They have a large round head with a short broad muzzle and large dark round eyes.

Because of the Japanese Chin dog’s small size they are easy to groom. Unlike the working dogs in Japan the Japanese Chin only has a single layer silky straight coat. Their coat is not prone to matting, however brushing once or twice a week is recommended. They do shed, but not in clumps. Occasionally they will have a light blowing of their coat once a year but nothing more. They need a lot of fiber in their diet, otherwise they may need their anal glands expressed. The oversized eye orbits of the Japanese Chin contribute to moisture around the face and nose that can cause fungal problems. Occasionally wipe their face with a damp cloth and the folds of their skin on their face with a clean cotton swab. The Japanese Chin dog is very sensitive when it comes to their diet. Many are allergic to corn. Feeding your Japanese Chin high quality kibble that does not contain corn will help avoid skin and allergy conditions.

The Japanese Chin dog is often referred to a cat like in attitude. They are alert, intelligent, and independent, they also use their paws to wash and wipe their face. They tend to rest on high surfaces such as the backs of sofas and chairs, and are known to walk across coffee tables without disturbing an item. They are very loving and loyal. The Japanese Chin dog has often been used as a therapy dog because of their traits and love for people. They are generally quiet but will bark when alerting the house of the arrival of a visitor or something out of the ordinary. The Japanese Chin dog is typically very calm but have been known to do the “Chin Spin”, in which they turn in rapid circles as if dancing on their hind legs while pawing with their front paws.

Vital Statistics: Place of Origin: China Group: Toy, Companion Height: 7-8 in. Weight: 14 lbs. Life span: 13-15 yrs. Trainability: moderate Good with children: Good with children – with gentle children Good with other pets: yes, but tends to be dominant The Pekingese has a long history in China, perhaps 4,000 years old. They were […]

Vital Statistics: Place of Origin: Germany Group: Toy, Companion Height: 10-12 in. Weight: 8-12 lbs. Life span: 12-15 yrs. Trainability: medium to low Good with children: with older, gentle children Good with other pets: yes, but will try to dominate other dogs The Miniature Pinscher was bred in Germany from the Dachshund and the Italian […]