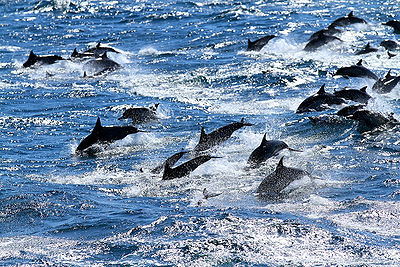 Almost everybody agrees that we need a robust and strong Navy to protect national security. And almost all of us agree that whales, dolphins, and porpoises deserve to live and to have a healthy ocean environment. But a recent proposal from the federal government tries to make Americans pick between these options, and it’s a false choice.

The U.S. Navy is proposing to conduct training exercises all along the U.S. East Coast and in the rich marine environment off the coast of California and Hawaii. These exercises would involve the use of live explosives and high-intensity sonar. According to its own Environmental Impact Statements, the Navy estimates that the planned exercises would kill up to 2,000 marine mammals, including a large number of animals from endangered species, such as right whales. Thousands of others would suffer permanent lung damage. An additional 16,000 would be permanently deafened and 5 million would be temporarily deafened by the exercises.

We understand the need for protecting our country, but we can find a way to ensure national security without sacrificing such an extraordinary number of whales, dolphins, and many other marine creatures.

We know that in the past, whales have stranded and died in the wake of major military sonar exercises, with bleeding from the ears and other tissue damage attributed to sonar. These have included incidents of beaked whales dying in the Canary Islands following sonar exercises, the panicked flight of orcas and porpoises off Washington State in 2003, and dozens of whales (including pregnant females) from several species who died in North Carolina in 2005. These tragedies can be avoided to a very significant degree.

The HSUS is joining other environmental and animal welfare groups to ask the Navy to consider steps to reduce the harmful impacts to marine mammals. These steps include avoiding the most harmful activities in areas used as calving grounds or migratory corridors; avoiding seasonal high-use feeding areas; creating a larger “safety zone” around the exercises; and using aerial or acoustic monitoring to determine whether marine mammals are nearby and may be harmed. Taking these steps would allow important military training exercises to go forward, while minimizing the likelihood that whales, dolphins, and porpoises might be harmed or killed.

We are calling on the U.S. Navy to re-think its plans and to incorporate additional protective measures.

Premium Nutritional Products Inc., manufacturers of ZuPreem foods for birds, small animals and exotic animals, has recalled some FruitBlend with Natural Fruit Flavors premium bird food due to suspected elevated calcium levels. There is a risk to a bird’s health due to exceedingly high calcium levels, low phosphorus and a high concentration of Vitamin D. […]