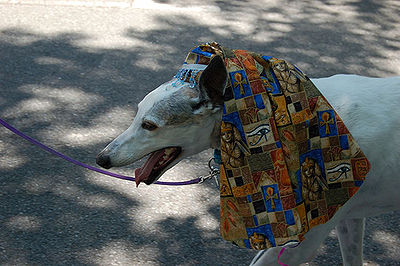 Historians don’t know for sure when humans started keeping pets. Dogs were one of the first animals domesticated by humans and have been domesticated for some 10,000 years. According to ancient Egyptian law, taking the life of a greyhound warranted the same punishment as killing a man. As early as 3500 B.C., Egyptians were domesticating wildcats from Africa. They considered cats to be demigods and the property of the divine Pharaoh. That ranked them above humans, making them the first to be saved if a house caught fire, before the people.

Buddhist monks in China began to raise goldfish in ponds in the seventh century. By the fourteenth century, the Chinese were keeping them in bowls.

In the Middle Ages, pets were limited to the upper classes who could afford to feed an extra mouth. During this period, some cat owners were put to death along with their cats on suspicion of witchcraft. This led, unsurprisingly, to a surge in the popularity of dogs as pets. Queen Elizabeth I (1533–1603) of Britain is said to have kept a guinea pig as a pet.

In the mid-1800s a large middle class emerged. Many more people were now able to afford pets. Birds were extremely popular because of their ability to sing (this was before the advent of the radio). The first pet food to go on the market was bird food.

The first dog food was marketed in England around 1860. It wasn’t until after World War I that canned dog food came into being. In the 1920s, people discovered reptiles as pets. Prior to that, houses weren’t centrally heated so people couldn’t keep reptiles warm enough. In 1947, cat litter became available and this made it much easier to keep a house cat. In the 1950s some women considered their dogs to be fashion accessories and would dye their poodle‘s fur to match their hair or clothing.

More recently, exotic pets have become popular. These include reptiles, amphibians and wild animals. Animals which have traditionally been domesticated for food, such as goats, chickens and pigs are now being kept as pets.

How do I keep my garden Pet-safe?

The first thing to do is clear your yard/garden of any material that is harmful to your pet if chewed or may injure your pet. Keep garbage and compost heaps away from any area your pet plays in. Rotted food can make your pet ill. Check the fence to make sure it is secure – […]

Maddie’s Fund, the Pet Rescue Foundation, is a family foundation established in 1999 to help fund the creation of a no-kill nation. Since its inception, Maddie’s Fund has awarded animal welfare organizations and universities $71.6 million to save dog and cat lives. I think this is a great organization and wanted to share some content […]