UNEXPECTED ANSWERS TO QUESTIONS NOT KNOWN 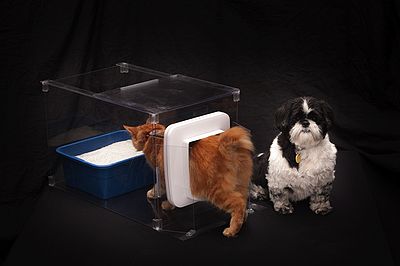 I’ve heard it said that when one door closes, another opens. From adversity comes light. This is the story of how one rescued cat ended up rescuing a world of multiple-pet owners.

FROM DOGS TO CATS

After a lifetime of dog ownership, we ended up with two cats. Well, actually, we started with one abandoned cat that made us fall in love with him, and when both our old dogs died, we decided to get another cat so he wouldn’t be lonely.

To keep our dogs away from our cat’s food, we fed our first cat (Mitchell) on a staircase mantel. No problem! But when we got our second cat (Flopsie), we ran into a situation that had never before crossed our pet-ownership paths: Flopsie is a compulsive over-eater.

We would come home from a day at work, and all the food would be gone. This didn’t seem to be unusual until, after a couple months, we noticed Flopsie getting bigger. Mitchell was getting smaller, but it was hard to tell because he has so much fur. We weighed him, and sure enough, he was about 2 lbs. lighter than at his last vet visit.

This is when we realized we had a serious problem. The extra weight on Flopsie was bound, at some point in her life, to cause her health to decline. And Mitchell, starving, was no better off. To say we tried everything to fix the situation would not be an exaggeration. First we tried feeding them only twice daily, when we were there to police them, but after 2-weeks of begging Mitchell to eat his food all at once, we realized it was hopeless. Flopsie scarfed down as much as we gave her and tried to eat Mitchell’s food as well. Mitchell would eat a few bites and walk away, only to come back expecting the food to be there as usual.

The only answer was to keep them separate all day. They (and we) hated this. The whole reason we got another cat was so Mitchell would have companionship when we were gone. So much for that!

THE SOLUTION MUST BE OUT THERE!

I got in my head, that I’d seen the answer somewhere “out there” in the pet store world. I could see it in my mind’s eye: A rectangular box with a locking pet door (the kind that one pet could unlock with a magnet on his collar). This was it! The answer to our problem. I went out to get one. I was willing to pay $500 if I had to, so great was our sense of aggravation and frustration. I scoured the stores, the aisles, for any sign of this elusive treasure. Nothing…nada…bubkis!

I came home discouraged but hopeful that the world of the internet would solve my dilemma. No such luck. I told my son of my despair, and two weeks later, he presented us with a wooden prototype of my idea, complete with a locking magnetic pet door. (It was not cheap at all for him to make, but he would not allow us to pay him for it. It was his gift to us—such a fine young man we’ve raised!…but I digress…) I went to work training Mitchell to use it, and soon he was entering the box to graze whenever he wanted. We fed Flopsie twice daily, and of course, she gobbled her food down each time. We had no worries leaving the house, nor guilt at separating them anymore. Our special box took over the police work, and life with our cats was once again joyful.

Within three months, Mitchell was back up to his healthy weight, and Flopsie was down to a healthy weight. Our special box was our own private miracle.

I NEED ONE OF THOSE

As could be expected, our friends would notice the box, and each of them had to have one, too, for various reasons. Some to solve a problem similar to our own, others to fix different multiple-pet ownership situations. One had a dog that ate the cat’s food. Another wanted to put a litter box inside for her two cats to use so that their dog couldn’t eat the kitty roca anymore. Another solved her cat’s spraying problem by giving both her kitties their own box with a litter pan inside, and using an RFID locking pet door so each would have it’s own programmed entry and couldn’t enter the other’s. We were building them, taking advice from our friends’ ideas, and watching with pride as our little invention was making life infinitely easier for so many people.

When one of our friend’s cat’s diabetes went into remission because he was no longer able to get at food he was not supposed to eat, their vet took notice. Soon we were manufacturing and selling our special box, and we applied for a patent. While having lunch with family, our other son suggested we call it a “MeowSpace.” Three years later, MeowSpace® is trademarked, and a patent has been issued. From all over the United States and Canada, to the United Kingdom, people we have never met are benefiting from our solution.

And to think…it all started with a cat!

As cats age they may suffer from stiff joints and arthritis. These problems can make stepping into the litter box a painful experience. If you notice your older cat having these difficulties, check the litter box. You may have to change it to a box with lower sides to help in making it easier for […]

White cats enjoy a special admiration because of their snowy coats that seem to sparkle. Their names often reflect their coloring and include Snowball, Caspar (for the ghost) and Puff (for powderpuffs). But along with their beauty, some problems can arise. They may have genetic defects caused by a deterioration of the inner ear. They […]

Cats can suffer from allergies too. Often they are allergic to the same things we have allergies to. Airborne particles like pollen or dust can irritate nasal passages and lungs. They can have allergies to certain foods, drugs like antibiotics, anesthesia, household cleaners and deodorants. As with dogs, the most common allergy is to fleas. […]