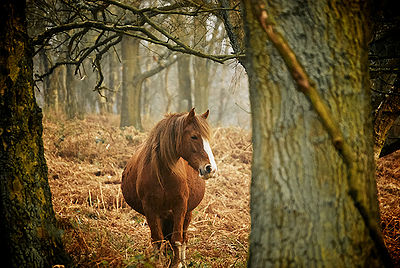 A mare’s pregnancy is 11 months long. That gives us enough time to prepare for the birth of the foal.

The foal will do most of its growing during the last trimester of pregnancy. At that time, about 8 months into the pregnancy, the mare will require more food. Care should be taken where the mare will graze because fescue grass should not be eaten as it can have a fungus which can cause complications in the pregnancy.

Use care in exposing the mare to other horses. Ask your vet what vaccinations are necessary. Do not administer any supplements or medications without consulting your vet.

Close to foaling time the mare begins to show signs of producing milk. The udder swells and there may be some leakage of milk. At this time it’s a good idea to prepare some items for the birth including towels, a bucket, iodine, large trash bags, long gloves, flashlight with extra batteries, a tail wrap. Have the veterinarian’s telephone number where it can be easily seen.

Signs of the approaching birth are restlessness in the mare, showing discomfort by getting up and down, passing manure. These will occur at the start of uterine contractions.

There are 3 stages to the birth of a foal. Stage one is the breaking of the waters. In stage two, uterine contractions are stronger bringing the foal into the birth canal. You’ll be able to see if the foal is in the right position – front feet first and the nose just behind. If there is any difference in the foal’s position, call the vet as an incorrect position can lead to problems delivering. The foal will be delivered during stage two in 20 – 40 minutes. If it is longer than that, call the vet.

During stage three, the mare passes the placenta, usually within a half hour of the birth. Don’t help the mare during this time as the placenta must remain intact and shouldn’t be pulled on. Placentas remaining in the mare can cause life-threatening infections. After it is delivered, put the placenta in a trash bag and refrigerate it. The vet should examine the foal within 24 hours of birth and will want to check the placenta as well.

Make sure the foal’s nose is clear. The umbilical cord will break by itself, but dip the end in diluted iodine to prevent infection.

Shortly after birth, the foal will stand although may not have steady legs. The mare will take over, licking the foal dry and pushing it to nurse. It’s important for the foal to nurse as the mare’s first milk contains colostrum which has antibodies to protect the foal’s immune system. Your vet can administer a blood test to the foal to check the level of antibodies.

After the vet checkup and all is well, you can look forward to enjoying the foal and mare, ensuring them a healthy, happy life.

Although there are many products available that claim to heal, there is no scientific proof that they do. But there is one product that can be effective. It has a long name: Silver Sodium Zirconium Phosphate Polyurethane Foam Wound Dressing. That’s a mouthful and it’s shortened to SPF Dressing. Researchers have found that while SPF […]

Regularly checking your horse’s teeth is vital to good health. Since a horse’s teeth never stop growing, problems can be commonly found. Just like humans, horses have 2 sets of teeth. By 9 months old horses have a full set of temporary or milk teeth, 24 in all. Permanent teeth replace the milk teeth over […]

Researchers have discovered that a horse’s behavior can be affected by its eyesight. Sight problems can cause difficulties with training and can even cause a horse to spook as well as have other unwanted behaviors. Cataracts can occur at any age in horses. The lens of the eye becomes clouded and appears milky-white, causing sensitivity […]