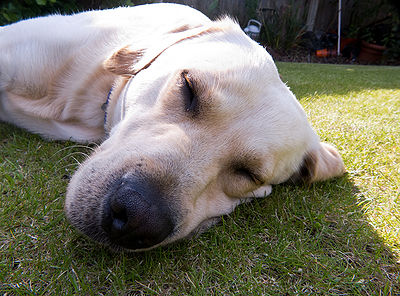 Epilepsy is a seizure disorder. It can be idiopathic (unknown origin) or acquired.

Acquired epilepsy is usually caused by a head trauma. One idea put forth about what causes idiopathic epilepsy is an imbalance in chemicals that transmit electrical impulses to the brain.

For the condition to be diagnosed as epilepsy, seizures must be recurrent and similar. You can help your veterinarian with the diagnosis and treatment by keeping a record of the seizures – how often they occur, behavior before, during and after each seizure, length of time each seizure lasts.

Epileptic seizures have 3 stages – aura, the seizure itself and post-seizure reactions. All the stages may not be visible to you and can even occur when the dog is sleeping. Sometimes seizures can be atypical with a dog licking or chewing him/herself, agitated barking, staring and/or snapping at unseen objects. This type of seizure is thought to come from the lower brain and is called a psychomotor seizure. If seizures are caused by a lesion in the brain, then epilepsy is not the cause.

If the dog is having a seizure in an area where it might hurt itself, move him/her to a safer place. Otherwise don’t touch the dog during the seizure and for a short time afterwards to avoid causing further seizures.

Seizures that last more than 5 minutes or cluster seizures (seizures that occur one after the other) are emergencies and you should seek veterinary help immediately. Your dog may need intravenous anti-convulsants.

Diagnosis may be made with a spinal tap, cerebrospinal fluid analysis, skull x-rays, a CT Scan or an MRI.

There are a number of drugs available to treat epilepsy, some in use for years, others new. But so far, none are 100% effective. The drugs can be used singly or in combinations.

Treatment with drugs is usually not indicated unless there are more than 2 seizures a month. Dogs on medication need to be tested regularly to avoid toxicity. Acupuncture and diet changes have shown to reduce number and severity of seizures.

Research is ongoing to find the gene that causes epilepsy. Discovery of the gene will aid in early detection and will help prevent dogs that are carriers from being bred. Dogs that are known to have epilepsy should never be bred.

Nuclear Sclerosis in Cats and Dogs

Nuclear Sclerosis, sometimes called Lenticular Sclerosis is similar in appearance to cataracts and glaucoma, as the eye becomes cloudy. One of the differences is that with Nuclear Sclerosis, vision is usually not significantly affected. The parts of the eye concerned with nuclear sclerosis are: the cornea, the transparent tissue in front of the lens that […]

Lymphoma, a common cancer in dogs is usually fatal, but is one of the cancers where life can be extended for long periods of time. Canine non-Hodgkins Lymphoma originates in the white blood cells called lymphocytes. They circulate throughout the body and normally protect it from infection. The abnormal lymphocytes build up in the lymph […]

Ehrlichiosis has many names – tick fever, canine rickettsiosis, canine hemorrhagic fever, canine typhus, tracker dog disease, tropical canine pancytopenia and is caused by ticks. There is a human form transmitted by tick bites as well. While any breed of dog can contract Ehrlichiosis, usually in a milder form, German Shepherds are sometimes severely affected. […]