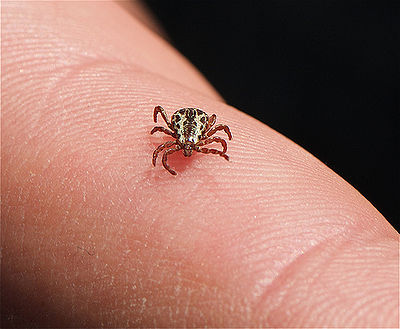 While any breed of dog can contract Ehrlichiosis, usually in a milder form, German Shepherds are sometimes severely affected. The brown dog tick and the deer tick pass the organism Ehrlicia Canis to the dog.

Ticks carrying the organism can be found all over the world. During the Gulf War many military dogs were infected and died. In the United States most cases can be found in the Southwest and Gulf Coast, but can occur anywhere.

There are 3 stages of Ehrlichiosis as follows:

1. Acute stage which can be several weeks after infection, can last one month, cause fever and low blood cell counts caused by bone marrow suppression.

2. The Subclinical or 2nd stage has no outward signs. The organism can remain in the dog for life. It is sometimes eliminated during this stage.

3. The 3rd or chronic stage is the most serious phase. It can result in very low blood cell counts (pancytopenia), bleeding, bacterial infection, lameness, neurological disorders, opthalmic disorders and kidney disease. The chronic stage can be fatal.

Especially in areas of high tick infestation, routine blood tests should be performed. Dogs that are dehydrated are given fluids either intravenously or subcutaneously. Antibiotics tetracycline or doxycycline are given for at least 6-8 weeks. When platelet levels are low enough to be life threatening, steriods may be given.

It is very important to control the tick population, especially during warm seasons when infestation is at its highest. In some areas of the United States where the climate is warm all year round, this means continuous control. Sometimes a low dose of tetracycline is administered during the contagious season.

Ehrlichiosis is a very serious disease and should not be taken lightly. Examine your dog daily, running your hands over the body to check for any ticks. Ehrlichiosis affects the production of white and red blood cells preventing the dog’s immune system from fighting the disease.

Dermoid Sinus is a congenital defect in the tubes from the surface of the skin down to the spinal column (Spina bifida in humans). As the disease progresses, the dog suffers great pain. The sinus is removed in surgery. The recovery can be as traumatic as the operation itself. A recovering dog must be kept […]

Canine Distemper is a serious viral disease that is highly contagious to domestic dogs and wild canids. It spreads through respiratory secretions of an infected dog. Owners of puppies who have not had the entire series of vaccinations should use caution with exposure to other dogs and when outdoors to relieve themselves. First signs of […]