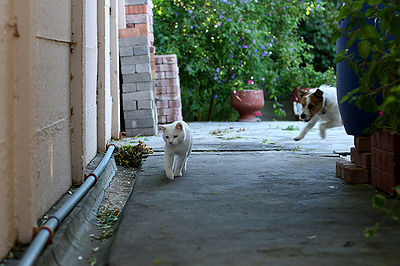 Dogs love a good run and it can be so much better when they have something to run after, especially a cat.

Some dogs just want to play, but others see cats as prey and if they catch them, will seriously injure or kill them. Even during play, a dog’s powerful jaws can cause unintentional injury to a cat. If the dog is not in a confined or fenced-in area and runs out into the street after a cat, both of them can be struck by a vehicle.

Contrary to a popular myth, cats and dogs can live together and even become best friends. The best way to accomplish this is to raise them together. Dogs will accept their own house cats but will still chase cats they are not familiar with.

Often if a cat stands it’s ground and doesn’t run, the dog may bark at it, but will not attack. The danger for both animals is if the cat decides to dash off. If the cat is caught (and this can occur even during play), the dog can suffer serious injury from those needle-like claws and the cat can come off even worse.

Declawing a pet cat is not an answer to the problem. Declawing means suffering a lot of pain in the aftermath, can cripple the cat and leaves him/her defenseless.

When a cat is already part of the household, it’s best to introduce a puppy under 12 weeks old. Don’t interfere as they get to know each other unless there is danger of serious injury to either one. Older dogs adopted from shelters or rescues usually undergo testing to assess their personalities. Shelter workers can often tell which dogs are likely to get along with cats.

The ASPCA advises the following:

The urge to chase is so strong in most dogs that it’s best to involve a certified animal behaviorist in solving the behavior.

The Shelter Buddies Reading Program launched by the Humane Society of Missouri is designed to help dogs become more adoptable. Most dogs, upon entering a shelter, are confused and stressed. Many become shy and timid or over-excitable. It was discovered that children reading to the dogs helped to calm them and relieve stress. Not only […]

When the New Dog Arrives

The best way to prepare your dog for a new arrival is to socialize early with other dogs. Knowing your dog’s personality – aggressive, anxious, fearful? – will help determine how to handle the arrival of a new dog. If you have a multi-dog household, introduce the new dog one at a time so as […]