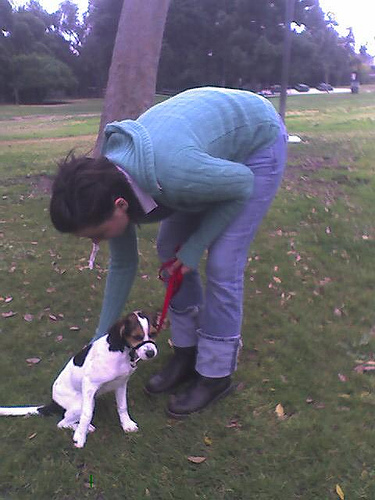 Pet Wiki contributor, Arie Menachem, alerted me regarding Leah Roberts of the Orlando Dog Training and Behavior Examiner, who wrote a thought-provoking article on the subject of Dog Training and its relation to the Milgram Experiment.

After World War II, Nazi war criminals excused their horrendous behavior away, saying they had no choice but to follow orders and commit the atrocities that were asked of them.

In 1961, Stanley Milgram, an American social psychologist, conducted an experiment to determine how far humans will go when under orders to inflict pain on fellow humans. Actors, named as “Learners” were used as controls while “Teachers” were ordered to inflict different levels of electrical shock from what was, unbeknownst to the Teachers, a fake shock generator. Subjects in both positions were from all walks of life and were told they were participating in a memory and learning experiment. The “Experimentor” was the person giving orders, prodding the Teachers to gradually increase the level of shock. The Learners (actors) were told beforehand how to react to each change in shock level.

The results of this experiment showed that 65% of participants would torture another human being, even to death, when an authority such as the Experimentor ordered them to do so.

Relating this experiment to dog training, Ms. Roberts goes on to say that first authority figure a dog or puppy meets is the veterinarian. Since vets are not trained in training dogs, they should not hand out advice except to refer the owner to a reliable trainer or animal behaviorist.

As an example, some vets and trainers recommend throwing dogs on their backs and pinning them in that position “to show them who’s boss.” Dr. Ian Dunbar, veterinarian, author and founder of the Association of Pet Dog Trainers and creator of Sirius Dog Training says of this technique, “A wolf would flip another wolf against his will ONLY if he were planning to kill it.” Can you imagine how this terrifies a dog?

What Ms. Roberts is saying is that just because an authority figure – in this case a vet or a trainer – tells you what to do, think before following their advice. Do not obey, especially if it goes against your instincts. Would you want a child to be taught with the methods recommended?

I’m a firm believer in positive training. You can be firm without being unkind or downright cruel.

While popular with the public, not all the trainers on TV are humane in their treatment of dogs. Just because they’ve become famous TV personalities doesn’t mean they train dogs humanely.

Don’t add your name to the 65% in the Milgram Experiment. When choosing a trainer or animal behaviorist, research them thoroughly. Question their methods and if you are uncertain or find them inhumane, look for someone else. If they don’t allow you to observe their training, find someone who will.

Never allow the use of shock collars, prong collars or other tools or methods that use force.

My two favorite dog trainers whose books I’ve used to guide me are Dr. Patricia McConnell and Turid Rugaas. Their kind training methods have proved time and again to be far superior to any others.

How Children Benefit from the Family Pet

Owning a family pet can be great for kids. Below are some of the benefits as well as things to watch out for. Contents 1 Responsibility 2 Compassion 3 Companionship 4 Possible pitfalls Responsibility Owning a pet is one of the best ways to teach a child to become responsible. Besides the joy of having […]