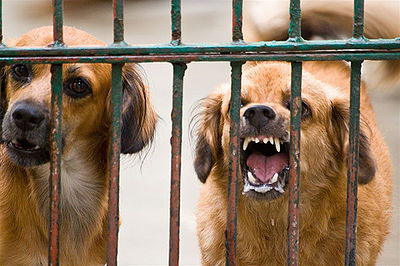 Punishment should never be used when treating aggression. Anything that causes pain to a dog should not be used. Most times it only makes the situation worse.

When your dog exhibits certain aggressive behavior such as dominance, try ignoring it. It can be an effective tool as dogs don’t want to be deprived of your attention. When your dog shows aggression, never offer it a treat as the dog will interpret this as a reward for its bad behavior. Offering treats, whether a pat or hug or something to eat or a toy only reinforces the behavior.

With fearful aggression, the dog is on the defensive. It will flatten its ears and alternate between approaching and backing off from the source. Fear aggression is the main reason for dog bites. Use the dog’s name and make eye contact at the same time. Each time the dog responds with eye contact, give lots of praise and offer a treat. It’s very important that you establish trust between you and your dog. You can desensitize the dog by keeping it a safe distance from the person or object it fears. Reward the dog with a treat if it doesn’t show aggression. Over a period of training sessions, reduce the distance between the dog and what it fears. If you reward good behavior and ignore bad behavior, the dog will overcome its fearful aggression.

Dominant aggression usually occurs between 2 dogs establishing its place in the hierarchy. When the other dog does not show submissive behavior, a fight may ensue. Try desensitizing the dog using the fearful aggression method. If the problem persists, it may be time to consult your vet or an animal behaviorist.

If your dog shows dominant aggression towards a member of the family or the whole family, it’s very important for you to establish your dominance. Keep calm but be in control. Whoever is the target of this behavior should be the one to control feeding, playtime and walks. You can withhold what the dog enjoys when it exhibits this type of aggression and reward the dog for good behavior. An example of this is when the dog wants to be petted. You should ignore the dog for a few minutes, then call it to you for petting. This makes you the dominant party in the dog’s eyes.

Protective aggression occurs when the dog sees something or someone as a threat to its home and family. The dog will bark and growl. If possible, you can arrange a supervised introduction. In the case of a person, tell the dog to sit and have the person offer the dog its favorite treat. In the case of an object, when the dog nears the object try to have him/her focus on you and offer a treat.

Exercise is an excellent way for dogs to overcome many problems. Frustration due to too little exercise can make a dog grumpy. The Tellington Touch, massaging the ear flap, works on some dogs. There are also homeopathic remedies to calm unwanted behavior.

If your dog bites or nips during play, stop, walk away and ignore him/her. Do this each time your dog exhibit unwanted behavior. S/he will get the message. Your dog wants your attention, good or bad, but doesn’t enjoy being ignored.

Before trying to solve any aggression problem, take your dog to the vet for a physical examination. Often medical problems, particularly when a dog is in pain, take the form of aggression.

Before beginning any behavioral program, discuss with your vet what is appropriate for your dog. An aggressive dog can be controlled, but not cured completely. Training is an ongoing exercise and it must be consistent. If you have difficulty solving the problem, an Animal Behaviorist may be the only answer. If all else fails, use a professional to help with aggression problems. Sometimes that is the only answer.

When asking your dog to do something, do you find yourself repeating a specific instruction several times (example-stay, stay, stay and so on)? Don’t feel badly, many of us are guilty of this behavior. Perhaps we humans think if we repeat a command, our dog will get it and do the behavior. Professional trainers tell […]

Dogs Make Their Own Beds

Does your dog turn around several times (according to some, it’s actually 3 times) before lying down? Your dog is only doing what comes naturally. In the wild, dogs looked for a comfortable, safe place to lie down in. They used their paws to trample an area and circled several times, ensuring a soft bed, […]

Caring for Your Pet’s Paws

Your cat’s and dog’s paws should be checked regularly, daily if they spend lots of time outdoors. If your pet limps, that’s a sure sign that something is wrong. Burrs or other foreign bodies can get stuck between toes. Sometimes they are so deeply embedded they are hard to see. These can be gently removed […]