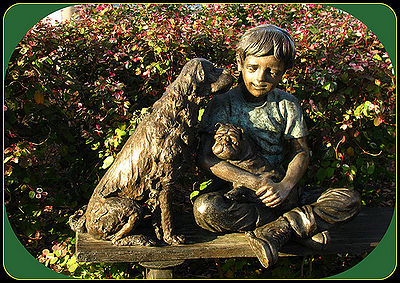 Although we are discussing mainly the behavior of children with dogs, this can relate to all animals.

Children are the most common victims of dog bites. Sometimes even with adult supervision, bites occur. Learning a dog’s body language and what is polite behavior to a dog can prevent most of those bites. Dogs give warning before they bite. It could be a sideways glance, an attempt to escape or as obvious as a growl or baring teeth.

Dogs who really love children show excitement when seeing them, tails wagging vigorously, body wiggling. Dogs who show a bit of tail wagging or none and just stand still for the onslaught, are only tolerating children and in reality are stressed by their presence to some degree.

It is only in extremely rare occasions that a dog will bite for what appears to be no reason. Most dogs bite because there are provocations, most of which are apparent.

You’ve probably witnessed a child interacting with a dog, jumping on a dog, pulling ears or tail, chasing after a fleeing dog. Some people think that the behavior is cute or funny. As animal lovers, we know it’s neither and it borders on animal abuse. Even kissing a dog or putting your face close to a dog’s face, especially if it’s a strange dog, is not wise. That’s why when a dog bites a child, it’s usually on the face. Dogs can consider that behavior as an invasion of their space. Some may tolerate it and others even enjoy it (I have one of those), but it can be dangerous. Often, children’s behavior can frighten dogs and they feel they must protect themselves the only way they can.

Here are some listings by the ASPCA of children’s behavior that need adult intervention.

Some of these behaviors may require professional help.

We can’t stress enough the importance of being able to read your dog’s body language. Learn his/her stress triggers and don’t allow situations to escalate to the point of biting by teaching your children proper behavior with all types of pets.

You must set a good example for your child by never hitting, yelling or using any form of abuse on your pet. Your child will learn by your actions. Explain simply to your child that we do not hurt animals.

If you accidentally hurt the pet, apologize to him/her so that your child understands that the pet is a feeling being.

Before bringing a dog or any other pet into your home, you must prepare your child by educating him/her about their behavior toward the pet and how to correctly interact with the animal.

Adults who abuse others often started with abuse of animals.

Unfortunately I have had personal experience with children teasing my dogs through the fence and parents accepting the behavior as normal. The children have since grown into teens but my dogs have not forgotten the abuse and although they adore my grandchildren, they do not trust any other children and in particular the neighbors.

According to a report by the Centers for Disease Control and Prevention (CDC), more than 4.5 million people are bitten by dogs every year. Before bringing a dog into your household, research the breed you choose. Consult a veterinarian, breeders, animal behaviorists for the best breeds for your household and lifestyle. If you rescue a […]

Dogs love a good run and it can be so much better when they have something to run after, especially a cat. Some dogs just want to play, but others see cats as prey and if they catch them, will seriously injure or kill them. Even during play, a dog’s powerful jaws can cause unintentional […]

In the right corner we have Killer the Chihuahua. In the opposite corner is Brutus, the Rottweiler. If you’ve ever shared your home with a small dog, you may have experienced your pet picking on the big guys. There could be several reasons why this happens. We often treat small dogs like breakable toys, much […]