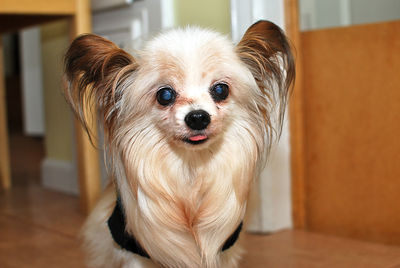 Cataracts can be hereditary or caused by disease such as diabetes or by trauma. They may be due to the aging process. Cataracts can take months or years to cover the eye. Depending on how they mature there can be limited vision.

Signs of cataracts can be a blue-green color in the eye, sometimes white or gray, redness and inflammation, vision problems exhibited by the pet such as bumping into things, pawing or rubbing the eye.

Ask your veterinarian for a recommendation to an ophthalmologist, a specialist veterinarian who treats eye disorders. The vet will perform a series of tests to determine if cataracts are present, including blood workup, ultrasound of the eye and use of special instruments.

If the eye is inflamed or the cataracts are caused by disease or trauma, the causes must first be treated. Once treatment is completed and/or discovery of cataracts is confirmed, your pet may be a candidate for surgical removal of the cataract. The veterinary ophthalmologist is the person who can advise you if surgery is indicated for your pet. The procedure is the same for pets as for humans. If cataracts are present in both eyes they are done at the same time. Pets may not have perfect vision with surgery but most do experience a huge increase in vision. With or without surgery there can be complications and it’s very important to keep follow-up appointments.

Unfortunately there is no known preventative for cataracts.

Keep in mind that aging pets should have twice yearly checkups so that problems can be detected early. Older dogs sometimes have a conditon called nuclear sclerosis which also presents a cloudy eye. It is a normal change to the lens with aging, giving the eye a blue/grey appearance but no vision impairment. Pets can have nuclear sclerosis and cataracts at the same time.

Here is a list of some dog breeds that are prone to hereditary cataracts:

Here are some cat breeds that are prone to hereditary cataracts:

This does not mean that these breeds will have cataracts, only that it’s important to keep watch.

This occurs when the stomach twists, trapping air and gases and blocking them from escaping. It’s also known as gastric dilation – volvulus (GDV). This can lead to low blood pressure, damage to internal organs, shock. The stomach can feel very hard to the touch. The dog is very restless, may whimper, may try to […]

Parvovirus can be a deadly disease in unvaccinated dogs and those with compromised immune systems. Parvovirus is highly contagious spreading through dog to dog contact, infected dog’s equipment such as crates, leashes, collars, food and water bowls. People who handle infected dogs can transmit the disease with their hands and clothing. Now another virulent strain […]