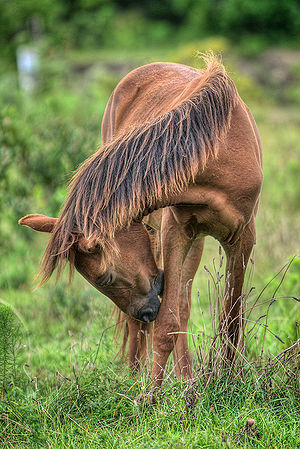 Scientists at the Wageningen University in The Netherlands are working on a cure for horse insect bite hypersensitivity.

Their research has led them to clone certain proteins in insects in the hope that these easily collected proteins can produce a cure.

As a result of current testing, scientists have developed an accurate test to diagnose insect bite hypersensitivity (IBH).

While it is not life threatening, horses are made very uncomfortable by the constant itch. Some horses are affected so severely, they must be euthanized.

Treatment now consists of using insect sprays, insect sheets, keeping horses in the stable during the hours when insects are most active. Topical steroid and antihistamine creams are used but do not always relieve the itching to any great degree.

Treatment with the cloned proteins requires repeated administration of the allergens until sensitivity is reduced. Research continues into the development of immunotherapy protocols.

Finding a Vet for Your Horse

It’s important for you to find the right vet to take care of your horse. After all, your horse is a very dear friend and you want the best care for him/her. The vet you choose should share your love of horses. One of the best ways to find a suitable vet is to talk […]

Researchers have discovered that a horse’s behavior can be affected by its eyesight. Sight problems can cause difficulties with training and can even cause a horse to spook as well as have other unwanted behaviors. Cataracts can occur at any age in horses. The lens of the eye becomes clouded and appears milky-white, causing sensitivity […]

Does Your Horse Have Stable Stress

We know what stress can do to us, physically and emotionally. Horses react the same way we do to stress. Chronic stress can take its toll on a horse’s mind and body affecting its ability to fight off disease and general health. Horses are flight animals. That is they run from trouble if possible and […]