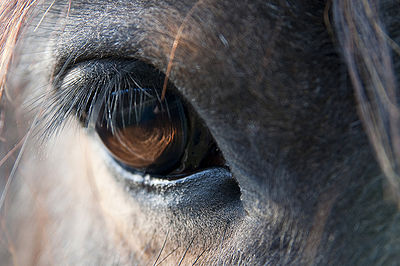 Spanish researchers at the Department of Agro-Forestry Services at the University of Seville (Spain) believe the stress level of a horse can be tested through its eyes with a thermographic camera.

In the study, Dr. Bartolome tested jumpers 3 hours before competition, immediately after jumping and 3 hours later. Heart rates were monitored as well.

Findings were that heart rate and eye temperatures followed similar increases and decreases. Dr. Bartolome’s conclusion is that they both resulted from stress.

Heart rate increased in horses traveling long distances (4-6 hours) with 3-6 hours of training daily. Eye temperature was not affected by travel or training but appeared to be influenced by age and genetics. Horse with higher eye temperatures showing higher levels of stress had poorer performances than those with lower eye temperatures.

Four genetic lines, German, French, Anglo-Arab and Mixed were tested. The Anglo-Arab breed had the highest eye temperatures showing more stress than the others.

Dr. Bartolome feels that this simple eye test along with heart rate monitoring and salivary cortisol analysis is a fast, efficient way to gauge stress levels of horses in competitions. The hope is that these tests will improve performance in young horses.

Summer can bring high temperatures and extreme heat. Our horses feel the rise in temperatures just as much as we do so it’s up to us to see to their comfort. Here are some tips to help you care for your horse in extreme summer heat and keep him/her healthy and happy. The most important […]

Ray Smith, PhD, professor and forage extension specialist at the University of Kentucky, in a publication when at Virginia Tech University that he helped author, stated that the concentration of moisture in hay contributes to the microbial activity leading to hay fires. Smith further stated that before baling, hay should be cured to the proper […]