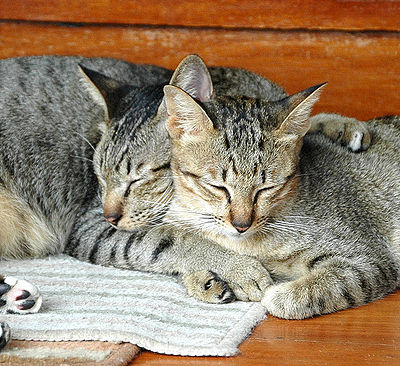 Once you have made the decision to bring a cat into your home and family, you may want to consider getting two instead of one.

How to choose two cats

If you do decide to adopt two cats, try to match their physiques and body types. Cats with similar body types will also have similar activity levels and will get along better. Two females will have the hardest time getting along, so consider adopting two males or a male and a female. If you are bringing a second cat into your home, make a list of your cat’s personality traits and ask the personnel at the shelter to help you find an appropriate match.

When introducing cats to each other, don’t leave them alone together for about the first month. Instead, give them supervised play time together until the adjust to each other.

Video: Omer and Snoopy going at it

Cat shows, while not as well-known as dog shows, are still pretty popular. The first modern cat show took place in London in 1871. The Cat Fanciers’ Association (CFA) has been running cat shows in the U.S. since 1906. Cat shows work in a similar fashion to dog shows. Each breed of cats has its […]